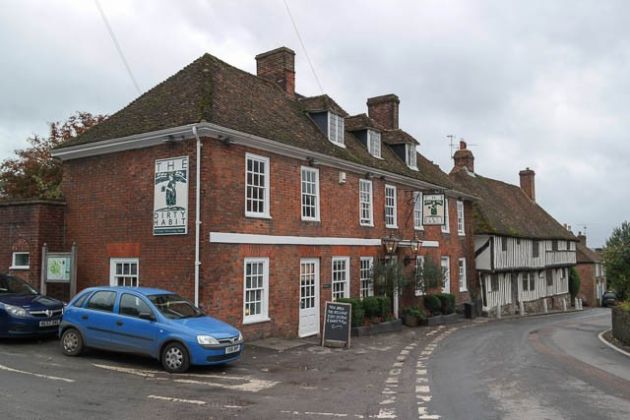 The Dirty Habit in Hollingbourne is part of Elite Pubs, the same group that owns The Vineyard in Lamberhurst and also The Farmhouse in West Malling. So, as we had great roasts at both of them, I was looking forward to our Sunday lunch at The Dirty Habit.  A table was booked for 4 plus a high chair for John William.

The drive was stress-free until we got to parking at The Dirty Habit. The spaces were not laid out very well, being quite tight and higgledy-piggledy. A few in the corners would have been impossible to get into unless you have a smart car or a motorbike! We spent 10 minutes in the car park alone trying to get out the car seat without damaging the car next to ours.  We then went down and up some steep steps to get into the pub with the pushchair. So, not the best start to our Sunday lunch experience.

Thankfully, most of this annoyance evaporated when we got through the door. We were greeted immediately by a friendly waiter and shown to our table. This was next to the ladies toilets, but it didn’t affect our meal (if anything, it kept John William amused with all the attention he received from ladies using the facilities). The pub was very much an 11th Century Country Inn, with a large brick fireplace, and dark wood on the walls. It felt homely and welcoming, especially as it was so busy. The table was laid out for lunch, and a highchair was appropriated for us to use.

We decided to go for at least a starter and main course, and perhaps peruse the desserts (we all know how this works – I say I’ll get a starter and then feint a remark of ‘possibly a dessert’ when I have already decided what I’m going to order – this time a toffee sponge pudding!)

Claire and I decided to share the Pork Terrine, and I asked for an additional Cured Meat starter to bulk up the order (was told by the waiter that the terrine was small). Claire ordered the Roast Beef for main (cooked medium to well), I went for the Roast Lamb. Lesley asked for the Parsnip & Chestnut Soup, and the Beetroot Salad as a main (it was a starter on the menu). Dad ordered the Potted Salmon, then the Fish and Chips (he did originally ask for the Sea Bass, but was told it was a small portion and suggested by the waiter to add a side dish). I personally appreciated the input and help the waiter gave us. We also ordered some bread to share whilst waiting. Drinks were dutifully ordered and brought over (by a waitress with a bad cold – a bit-off putting when you are being served food by her… I didn’t mind, but other people complained).

Bread came out quickly and looked tempting. The crust on both the white and the granary was delicious – a great start to the meal.

Our starters came out fairly quickly. Dad and Lesley’s looked good.  Lesley commented on how nice it tasted, especially the truffle bread roll. I was quite disappointed with our starter. The terrine was not like any I have had before. It was very solid with a lot of vegetables in it (I’m used to a pate/hock like dish with some gelatine). I also thought it didn’t have any flavour at all – like eating rubber. Very disappointing. Claire did agree it was different from previous terrines we have had, but enjoyed the starter as a whole. The cured meat was nice, and came with some more delicious bread.

Our main courses came out quite a long time after we had finished our starters (we found out later that there was a large group in another part of the restaurant).  Lesley’s meal was extremely small – the waiter got confused with the original order and thought she wanted a starter as a main course, when in fact she wanted the starter as the size of the main course.  This was sorted out fairly quickly, but it did mean we waited a while – the waitress said they would only charge the price of the starter size.

Dad was very pleased with his fish and chips – the fish was very good and the chips were superb (they seemed double / thrice fried).  He also enjoyed the mushy peas.

Moving on to the Sunday roast.  I was very pleased with the lamb – I had a couple of slices of meat, but it was tender and of good quality.  The roast potatoes were excellent, extremely crispy and fluffy.  The roast beef wasn’t as good unfortunately – perhaps they were not used to providing a medium-well beef, but the texture was almost of leather (ie tough and not appetising).  Both of us enjoyed the al dente carrots, cauliflower and broccoli.

The Yorkshire pudding was nice – quite large but certainly crispy and light.  The gravy was good, a fair amount and enough to ensure the roast potatoes and Yorkshire were kept moist.

So, after such a large Sunday lunch, did I have room for dessert?  Of course!  Looking over the menu, they had interesting choices such as White Chocolate Pancake and also Apple and Blackberry Crumble.  I had already chosen my dessert though – the Sticky Toffee Pudding with Treacle Sauce and Ginger Ice Cream.  I also asked to have a coffee to be served at the same time as the dessert (Dad asked for an Americano).

After about 15-20 minutes, my dessert was served.  It looked very nice, a large toffee sponge in the middle of a moat of syrup. The ginger ice cream was sitting on top.  I was very pleased with my choice, toffee and ginger are two of my favourite flavours.  Something that did irk me though was the delay in receiving our coffees – I asked for them to come out with the dessert, but they didn’t arrive until 15 minutes later (ie once I had finshed eating).  Also, it took at least 20 minutes for the bill to arrive after asking for it.  Whilst we enjoyed the food at The Dirty Habit, this added quite a lot of pressure on to Claire and me having to ensure that John William was fed and napped properly.

So, on to a conclusion.  The service initially was very good, I was happy we were met when we entered the pub and also the attention when we initially ordered.  Unfortunately though, this deteriorated during the meal, to the point that we had to ask 3 times before the bill was provided.  I asked (and was acknowledged) for the coffees to be served with the desserts, but they were served afterwards.  The venue itself was very nice, an 11th Century inn certainly had character.  I do wish the parking was better though, we spent 10-15 minutes just getting parked up to the pub!!!

So, how does The Dirty Habit score over it’s sister pubs, The Vineyard and The Farmhouse?  I wish the service was better,  but unfortunately due us being kept waiting between courses, the coffees being served a lot later than I asked for and the bill taking a long time to be sorted, The Dirty Habit scores 3.5/5.