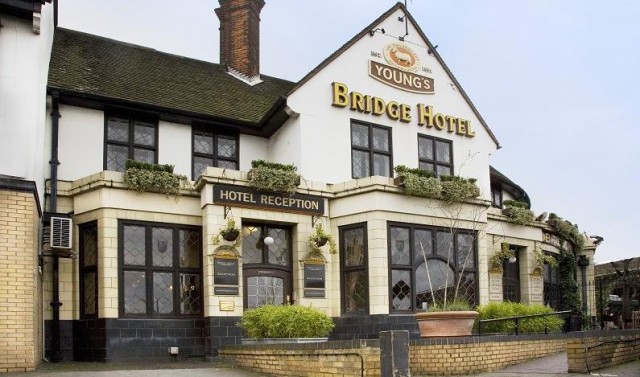 We were meeting friends for lunch, so needed to find a restaurant / pub which is easy for all of us.  This fitted the bill as it is 20 seconds off the A40, in between Ruislip and Ealing.

They have a secured car park, although the gates were open for the whole time we were there.  We went through the entrance to the hotel, and then turned right to the pub.  The barman was very good, said he will be with us in a minute (as he was covering some of the restaurant too) and was straight with us.  Ordered a couple of drinks, easy to set a tab up (some pubs only allow credit card tabs) although I changed my mind and decided to pay cash instead (they accept American Express if you were wondering).  The barman let us know we can eat in the bar area if we want, or eat in the restaurant.  After polishing off our drinks, we decided the later.

Moving to the restaurant, we were met by the waitress who showed us to our table.  There was a big party of around 15 celebrating a birthday (by the singing of “Happy Birthday”, it was for Grandma).  Apart from the party, we were the only other people in the restaurant.

We looked around the decor, unfortunately whilst it was a nice shade, it was also quite tired with the wallpaper hanging of the ceiling and a bulb gone in a lamp.  Also, looking out the window, there was a washing machine, an old school desk and some cardboard boxes (this is the hotel car park, so their responsibility in my opinion).

On to the menu…  the waitress told us the Sunday roasts were beef, chicken or pork.  She was very good natured and friendly, which is always pleasant.  I know it’s a small thing, but the font on the menu was very strange making it look cheap (whilst the pricing was quite high).  Claire and our friend Abi chose chicken, Phil (the other half of the couple) and I decided on the “trio of meats”.

I have to say, it took a long time for the food to arrive.  I appreciate that there was a big party, but it was over half an hour.  When it arrived though, wow!  The Yorkshire pudding was huge!  Claire’s half chicken looked really good and juicy.  Mine and Phil’s roasts, on the other hand, were a bit different.  The beef was literally like a “sole of leather”.  Underneath the meat and Yorkshire pudding, the vegetables and potatoes were hiding.  Disappointingly, there were only two small potatoes on each plate, they were very fluffy though :-).  The broccoli was cooked well, and a couple of small carrots with parsnips finished off the veg selection.  It just wasn’t enough!!!

I know that these reviews are only about the roasts, but I do need to mention about the desserts.  They were quite expensive, around £5.70 each and the selection was bizarre such as Baked Camembert with brandy and apple on skewers.  We were recommended the “home made tiramisu”, Phil had this, I had the berry crumble with white chocolate ice cream.  A couple of coffees were also ordered.  Unfortunately, the desserts took a long time to come out.  The tiramisu came out nicely presented (and quite large).  My crumble came out with cream; I requested the chocolate ice cream as listed on the menu.  A quick grumble later from the waiter (who was also the barman) about “that’s what it comes with”, and some (plain not white) chocolate ice cream was presented.  The crumble was quite nice but the “home made tiramisu” wasn’t that great.

Overall, the experience was one of mild disappointment.  The chicken was excellent, as was the Yorkshire pudding, but not enough veg or potatoes.  The beef was atrocious and if my meal was all of this I would have been extremely unhappy.  Service was mostly friendly (especially from the waitress), but very slow.  I wouldn’t be able to recommend it, but if you were in the area and have no-where else to go, then get the chicken.