Home > London > Chiswick > The Hole In The Wall, Chiswick 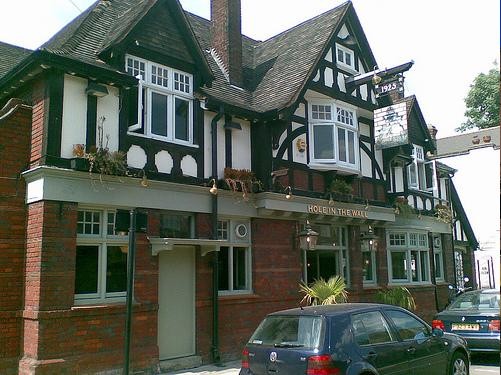 We found The Hole in the Wall on the Internet, described as a gastropub. Tucked away from the main road, we found it to be quite empty although most of the tables were reserved. Thankfully we had already booked. We were shown to our table which was very small and tucked into a corner right next to the loo. I’d recommend booking and requesting a nice table if you are going to visit! I didn’t mind too much but John felt really uncomfortable as we were sitting at right angles to each other. When we asked about being seated somewhere else, we were only offered to go have a look in the bar area as the restaurant area was full. The restaurant area itself did look really nice though, just my kind of place – light and airy, with pretty fireplaces around.

We didn’t have to wait long to be served, in fact we were approached a couple of times but were still deciding what to have (and whether John was happy to stay at the table we were given!). Once we’d placed our orders, we were asked if we wanted any bread while we waited. As we were hungry, we said yes and it came out fairly quickly. It was nice, although before we’d even eaten half of it the roasts arrived – we were a bit miffed, as it was less than 5 minutes after receiving the basket of bread. If we’d have known that the food was going to be so quick, we of course wouldn’t have ordered the bread. At around this point, a large party came in and were really noisy, but in all fairness this wasn’t the pub’s fault – it was just really frustrating to have to shout to make ourselves heard.

Now to the food, it looked great – a stack, the meat on top of a bed of roast potatoes, surrounded by roasted carrots, roasted onions and roasted swede. On closer inspection, there was also half a head (not just a clove!) of garlic in amongst the food. It was something of a surprise, especially as I tucked into the food it didn’t actually taste like it had been cooked with the garlic (I’m presuming that the garlic was roasted separately and added to each plate of food when serving). In fact, the meat (lamb) was slightly bland, and only lukewarm. When I added a little of the roasted garlic to my food I found it to be overpowering and so it didn’t actually add anything to the meal. The potatoes underneath the meat were home made, but were disappointing – very soggy. The vegetables were good, the swede was surprisingly tasty, but all of it was roasted and in my opinion I’d prefer at least some of it cooked in a healthier way for more of the meal to consist of veg – but that’s just down to taste. There was plenty of gravy, some places don’t supply enough, but this was a little on the watery side for me.

The house wine was average, but I was happy that when I asked for a glass of tap water I was given a jug with ice and lemon, with two glasses. That was a nice touch as some places will just give a grubby looking glass of water that you can’t help thinking comes from a grubby sink!

I have to say, the staff were unimpressive. They were there to take our orders but when we wanted to pay the wait seemed an age. Their moods ranged from ‘not very cheery’ to downright grumpy, and both of us just couldn’t wait to leave – so much so that he didn’t even want to look at the dessert menu!! As we left, the staff didn’t even acknowledge us even though we walked right past them. Not impressive.

Overall, I would have to say that I won’t be going back in a hurry. The food was average, not too bad, but the overall experience was a feeling of being rushed (the food coming out very quickly and the staff coming over to us quite often, until we wanted to pay which then took quite a while) and generally not feeling welcome. The comment I made whilst sitting there was ‘I feel like we’re in someone else’s home, being tolerated but not welcome’.