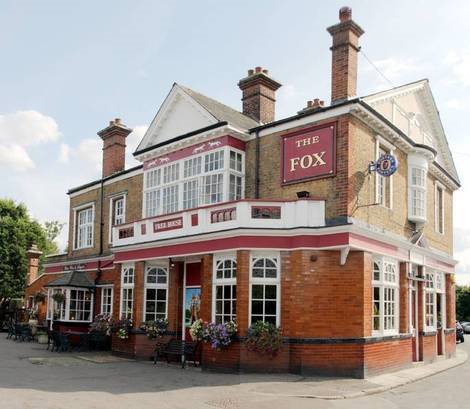 Claire and I have passed The Fox Inn a couple of years ago when walking along the River Brent. It seemed a nice enough pub; we received an email a week or so ago suggesting we visit, but to book a table in advance as it does get busy. As we were at a bit of a loose end this week, I thought it would be nice to give it a try.

I found their website and gave them a call. Booking a table took slightly longer than expected, as there was background noise in the pub so they couldn’t hear me very well (I did call at 8pm on a Saturday, so I can’t be too annoyed :-)). A simple process though, booking a table for Sunday lunch.

We drove over to the pub, very much down a narrow lane, and managed to find a parking space directly outside. This was fortunate, as the weather was a bit gloomy. Outside, impressions were good, they have a garden, adverts for a craft fair once a month and two entrances into the pub. We walked through a set of doors and into a dining area. I was very pleased we booked a table, the pub was extremely busy! Walking up to the bar, the staff were friendly enough. We asked about our table, the barman went off to search for the reservation. It turned out that there were some people sitting at our table, moving off without any fuss. Incidentally, there were a number of people in the pub wearing dressing gowns. I later overheard a conversation and found out that a group were going for the Guinness World Record for the most amount of people wearing dressing gowns! They got to around 191, and needed to get to 250. I believe they are re-attempting this next week (find out more here – http://tinyurl.com/62ojw92)

We were able to order drinks at the bar, set up a tab and receive waitress service for food ordering, which was nice. A menu was brought over by a waitress, and there was a good selection of food available, including Roast Beef, Roast Lamb, Roast Chicken, Roast Pork and Nut Roast. Claire decided on the Roast Chicken, I went for Roast Lamb. The Fox Inn’s website shows the roasts to be £8.50, the menu has them down for £9.50; I was a bit put-out by this. They did have cheaper options for a child’s portion, which shows how accommodating they are for families. I like the fact they have a large range of hot drinks, including Redbush tea (caffeine free).

Whilst waiting, we had a look around the pub. The decoration was quite nice, high ceilings with wooden beams and stain-glass windows. A number of families were there with children, lots of high chairs around. I was very amused with a couple of jars behind the bar selling dog chews and biscuits (10p each, if you are interested). This was a country pub for walkers, families and local residents. This is a fine example of a pub being core to the community. There were a lot of certificates for “Best Pub of the Year” by CAMRA, so if you like your ales, then this would definitely be suited to you!

Our food came out after about 10 minutes wait. The first thing I noticed was cauliflower cheese, definitely one of my favourites. It was a bit strange that Claire’s chicken was sliced, we are used to receiving a quarter of chicken or a breast. I had a couple of slices of lamb on my plate (which was good, as that’s what I ordered!) Two roast potatoes, some mashed potato, brocolli, carrots, green beans and yorkshire pudding was also served. Claire’s plate also had some stuffing. What was a nice touch though, Claire had different gravy from me.

Claire’s chicken was “OK”, unfortunately it didn’t have any flavour but did taste better than it looked. I enjoyed the lamb though. Potatoes was quite good, crunchy on the outside and fluffy in the middle. The vegetables tasted fresh and well cooked. The cauliflower cheese was nice, I would have preferred some burnt / crispy cheese, but that’s down to my taste. The yorkshire pudding, whilst a bit small, was also nice. Unfortunately though, I didn’t really like my gravy and felt that there wasn’t much flavour to the meal. Claire enjoyed her gravy but agreed with me that there wasn’t much flavour going on – the stuffing did add something for her though.

Desserts wise, these were a lot more reasonably priced at £4.50 each (the cheese board was £6.00). A good selection were on offer, including Apple Crumble, Sticky Toffee Pudding and Banoffee Pie. I had to give one a go, just to make sure they were ok :-) I chose the Banoffee Pie and wasn’t disappointed. A nice biscuit base and a thick layer of cream sandwiched the banana and toffee sauce. Claire opted for a peppermint tea, which came out in it’s own small tea pot.

So, in conclusion, this is more than a pub, it’s an outlet for a community. They are extremely family friendly, and well suited to walkers too. If the Sunday Roast price was as advertised on the website for £8.50, then this would be easier to recommend. But, in my opinion, it is just a bit too expensive at £9.50. If we had children and lived round the corner though, we would be in here quite often for a drink as they are so accommodating and had such a lovely atmosphere.

The Swan at Chapel Down, Tenterden