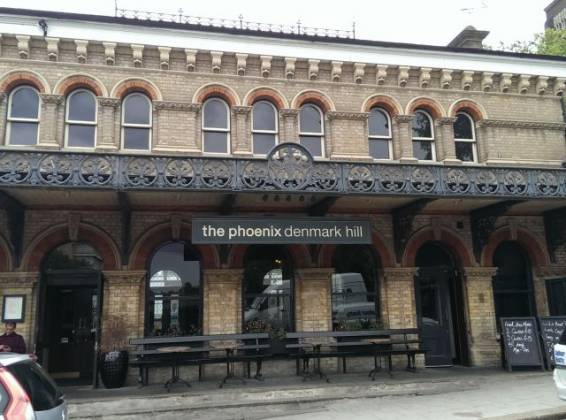 I’ve visited The Phoenix in Denmark Hill a number of times over the past few years as it’s close to Kings Hospital (where John William was born!). They offer a great selection of craft beer, so it was with great excitement I booked a table for 4 + baby for Sunday lunch.

Arriving pretty much on time, we entered the pub through the double doors. A metal spiral stair case going up to a seating area was in front of us, and seating to the right. Bar was on the back wall to the left. Our table was in the restaurant area at the back of the pub.

The venue had a large (rail station type) clock hanging down from the ceiling, and there were a few mirrors dotted about the pub. Exposed brick work gave the place an industrial, or at least a working railway station look (it shares the building with Denmark Hill station). Overall, I liked the decor.

Settling in, I went to the bar to get our drinks. Claire and Rona both went for a diet coke (£2.15 each), I was (very) disappointed to find both wheat beers were off the pumps!!! Craig and I went for a nice craft lager in the end (Sierra Nevada – £5.20 a pint). Such a shame they took off the wheat beers though!

Back at our seats, we looked over the menu. The waitress came over and took our order – roast beef for Rona and me (I asked how it was cooked – normally well done, but could serve me slices from the middle if I wished). Claire ordered roast chicken, Craig asked for roast pork. Oh, and they sell cauliflower cheese (£3.50 to “share” – yeah, right)… so, I just had to order one of them too.

Food came out fair swiftly – the portions were quite sizeable with a lot of carrots! I was pleased with the large amount of meat on my plate – it looked medium-rare too. Claire had half a chicken, and the crackling on Craig’s plate looked extremely inviting.  We had a large Yorkshire pudding each, and some nice looking roast potatoes. 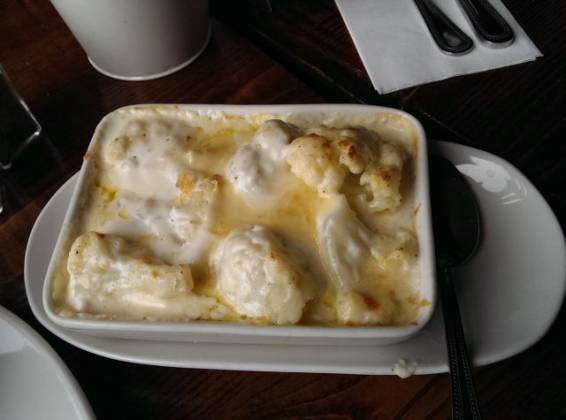 Tucking in, I liked the meat – it was cooked how I wanted and was enjoyable.  The roast potatoes looked the part but were in actual fact new potatoes – these are not suitable for a Sunday roast (or, at least, for this website reviewer!)  New potatoes do not crisp up on the outside, nor do they get the fluffy texture inside.

On to the vegetables.  In my opinion, the carrots were far too overcooked. They were very mushy without any flavour – I prefer mine with a bit more bite. I wouldn’t have minded so much except for the fact there was a lot of them! Oh, and courgettes too – again in my opinion, courgettes are not vegetables for a roast dinner. There were also peas and some sort of bean. Really, I wasn’t happy with the vegetables. Conversely, Craig and Rona both thought the veg was the best part of the meal (as in, they really enjoyed them). So, it’s a question of personal taste… The point of this site is to review all places the same with Claire’s and my criteria – so standard vegetables:  could do better!  The cauliflower cheese was good – a lot of cheese sauce and perhaps not enough cheddar (or other cheese) on top, but I was grateful to have the option and it was a good attempt.

Claire felt her roast chicken was a bit too dry, and lacked much seasoning.  I was quite jealous of Craig’s roast pork – with the large crackling :-)  I could tell by the fact that his plate was clear that he enjoyed his lunch immensely.

The Yorkshire pudding was something everyone remarked on being tasty – definitely seemed to be homemade and not too oily.  The gravy was also enjoyable, just enough to last the meal.

The desserts were interesting – Rona went for the Chocolate Brownie (£5.50), Craig the Salted Caramel Tart (£5.50) and I just had to give the Trio a go (£8.50 it was a sharing dessert – so I was going to let Claire have a spoonful).

I so got the best deal with my dessert :-)  The chocolate brownie was good, and the salted caramel tart tasted amazing (both sweet and salty – such a good combination).  The star of the show was most definitely the lemon crumble.  I am not sure if I have had anything quite so delicious – very sweet and sharp, almost a rainbow of flavours on my tongue (and on the plate too!).  If I were to come back to The Phoenix for desserts, I’d order two of these!  Both Craig and Rona were pleased with their choices, and Claire enjoyed the morsel I allowed her to have!

So, a conclusion.  I had high hopes with The Phoenix because of my previous visits.  I was extremely disappointed they removed both wheat beers from their taps, but I should look at the pub with fresh eyes.  The selection of beer was excellent – a large range of craft beers as well as old favourites.  They had a good selection of wines too.  The service here was good, the waitress made sure we had everything we needed without being intrusive.  The roast was a mixed bag.  I enjoyed the meat and the Yorkshire pudding, as well as the cauliflower cheese.  It was severely let down by the quality of the standard vegetables though, serving courgettes is a mistake in my opinion, as well as very overdone carrots.  The puddings on the other hand were excellent and ranked up with some of the best we have had.

On to scoring:  if the vegetables were to my taste, they would score higher, but as it is The Phoenix in Denmark Hill, London scores a respectable 3.5 our of 5.