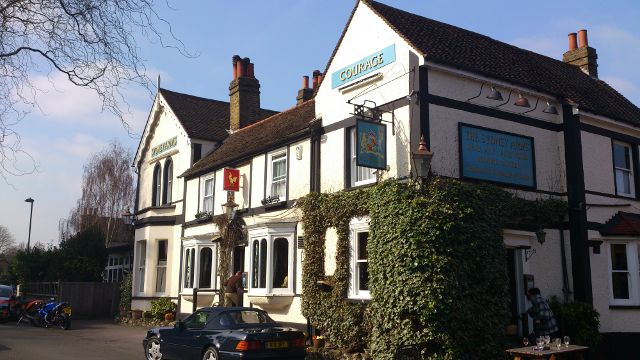 It was a beautiful sunny Sunday, and after a couple of hours’ hard work at our allotment John and I were ready for a nice roast lunch. We hadn’t booked anywhere, but John is always prepared on a Sunday and had brought a review sheet along. A short drive away, we decided on The Sydney Arms.

As we entered, the pub had a local feel to it with what seemed to be regulars in the bar. We walked through the bar into the dining area, and I was a little confused that no one was looking after the room so we didn’t know whether we could just sit down at one of the tables or not. We had a glance around and all the nice tables with the comfy dining chairs were reserved, so we sat down at the only free table – far less comfortable with six smaller chairs crowded round a table suitable for four. Anyway, we were happy to find a table and we could see out into the garden.

John went to order drinks while I had a look at the menu. When he came back he had a napkin with a couple of pieces of cheese and some mini cheese crackers. They had a nice selection (brie, blue cheese and two others) on the bar under cover for people to help themselves to, which we both agreed was a nice touch.

While John was at the bar ordering, a waitress (or manageress?) came up to me and asked how long I’d be there. I was a little taken aback and told her we’d just ordered. She then proceeded to tell me someone had phoned in to make a booking for 3pm (it was just after 1pm then) and that this was the only free table, so would we be finished by then? I was slightly annoyed as the table wasn’t free, I was sitting there! But said yes we would be finished by then, so she put down a reserved sign. I think if she had used a little tact I may have been less offended, but it seemed that someone phoning in was getting preferential treatment over us being physically there.

I decided on the roast beef, and John chose the roast lamb. I was slightly disappointed when the meal arrived. The meat was curling at the edges and it looked a little uninspiring. But I have to say when I started eating it I enjoyed my food.

In fact, the meal was pretty good for the price.

The roast potatoes were tasty, although I would have liked them a bit crispier, and I wished the solitary boiled new potato that I left was a roastie instead. As mentioned, the beef was curling at the sides and was pretty thin slices with plenty of fat, but it tasted nice. There was no pinkness to it at all, so if you like your meat cooked less than well you may be disappointed here.

The vegetables were pretty standard (advertised as 3 seasonal veg, we were served broccoli, carrots and cabbage), cooked to be slightly overdone and watery, but I guess not everyone likes their veg cooked al dente. The Yorkshire pudding was extremely small so they could have been a bit bigger or maybe two could have been served. They tasted okay though, they were quite dense and heavy so not sure if they were pre frozen or freshly cooked. The gravy was tasty, it had a nice meaty flavour which enhanced the meal.

As we left the pub, no-one acknowledged us or said goodbye, but we noticed that they had a bowl of imperial mints for everyone to help themselves to so I left feeling appeased.

To draw to a conclusion, I feel the service could be improved upon for the Sydney Arms but they made an effort with the cheese on the bar, a touch that we both loved. I enjoyed the meal and would have no problem in recommending it as a venue for a family lunch where price is important.